Before I start this post, I just want to say a few things.

Having volunteered in for the charity in their 5k and 10k events I have huge respect for them. 85% of people working at the events are volunteers and truly, these events would not run without them. They raise much-needed funds for research into a disease that the world cannot yet escape and without their work people suffering with cancer would not live as long. The charity and what they stand for are brilliant. I am a supporter of the women only events as it encourages those who would otherwise not run to enter an event and work their hardest to complete it. The atmosphere on their event days is generally fantastic and I love seeing people come together for one cause and to stand up for those that they love.

Now to the event.

I signed up to this a while back when Race for Life were offering free places at their events through the Run Mummy Run network. I have always loved their 5k and 10k events, having taken key volunteer roles for around three Race for Life seasons. Having done this, admittedly I have never actually taken part in one of these events, only a Pretty Muddy a few years ago when the event first started up.

Me and my friend from running club arrived in good timing, the car park was a 10-minute or so walk away from the start line giving us enough time to stretch our legs. I was quite surprised that the event wasn’t heaving when we arrived (the half marathon was starting at 9.15 and by this time it was 8.45) but I later found out it was only half marathon and 10k runners who were starting from 9.15-.30. I think this lead to an atmosphere that I’ve not really experienced during a RFL.

After a bathroom stop, portaloos a plenty, my friend went to check out the bag drop, where she was told there was no bag drop. Say whatttt? It clearly said online there was bag drop (and to date it still says that). Doubting myself I saw another half marathon runner with a big bag and asked her if she was expecting a drop to which she replied yes, it says so online. A little miffed by this we went to the event information tent and asked again. To be honest I was prepared to fight my corner, there was no way we were going to get to our car and back on time. However, on our second ask, they said they would take our bags though pointed out this was not usual practice. Obviously a mixed-message between volunteers and management.

So, we’d now dropped our bags and were invited to head over to the stage area for the warm-up. Being such a hot day I’m not sure we needed it! But in the spirits of the event we took part. We then made our way to the start line. A little bit later than scheduled we were surprised to see the lack of half-marathon entrants. I mean, there can’t have been more than 40!

Next we were on our way. Bearing in mind we were only given directions of the route and not a course map I really had no expectation. First was a lap around the field. And to be honest in 25+ degrees I couldn’t even do a whole 5k at half marathon pace without taking a walk break. Given the temperature and that the whole of the first 3 miles was unexpectedly on grass, my hopes for this race weren’t very high. I even sent a text to my friend telling her that she’ll be waiting a long long time for me. 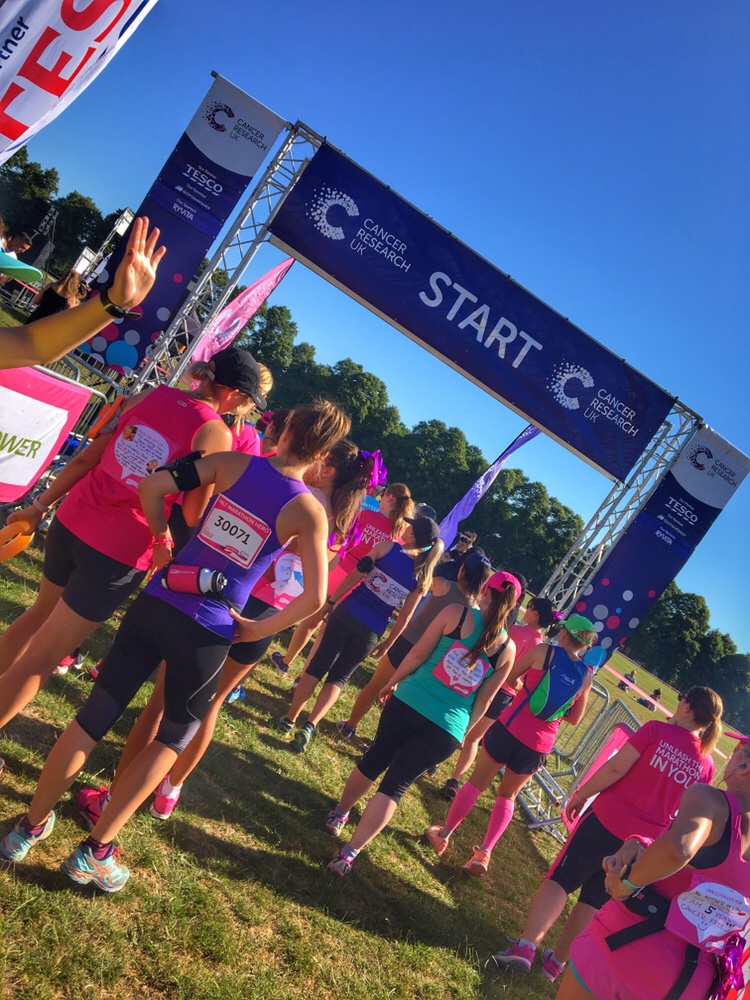 After the first three or so miles we headed out of the park and down New Walk into Leicester city. To be honest, event looking at Strava I’m not really sure when I went. All I know was that here was a canal – which was nice to run along and we ended up at Abbey Park, which I recognised from a 10k I did in 2016. Out of Abbey Park and we were met with a feed station that was actually really well supplied. We had drinks, brioche if you wanted it – I couldn’t think of anything worse, and an electrolyte drink. There were no sweets or gels but the electrolyte drink was much appreciated.

In Abbey Park there were a few confusing turns and signposts that didn’t make sense but we managed to navigate our way through and at the pit stop a group of us met and had a nice chat. Then we continued on and in the second half is where it went downhill…

We hit another park where there were no directions, signage was all over the place (and you can’t blame the football it was up to the race organisers) so much so that I followed one person and another group were shouting to me because I was going the wrong way. I suppose it gave us something to natter about, a few also mentioning how badly organised and marshalled it was. My friend, though we weren’t running together, at this point was nearly sent on a four-mile round trip (adding to the 13.1 she was already doing). Anyway we carried on, finding our way around, slightly worried that we couldn’t find our way. We couldn’t blame the marshals as I don’t think they even knew where they were going let alone us, having not seen the course map beforehand.

Finally, we were on New Walk – up this time instead of down. We knew we still had 3.1 miles to go. It went from bad to worse. Once we entered the field to do the final 5k there was no directional signage at all, let alone marshals to direct us. In fact, we even went through the start line getting stuck because we were unable to get through! An absolute disaster so much so that we made up the route and once I finished ended up being 1k off the half marathon mark.

In other news, there was water every three miles which was needed, though I also wore my hydration pack. I did hear they ran out at mile 10 – after I had passed which isn’t great considering there was only 37 participants. 70 were scheduled to take part, so I can’t imagine how early they would have ran out if all had turned up.

I don’t want to be a complainer, given as I didn’t pay for a place, however I am just so disappointed given how good the 5k and 10k events usually are, how RFL has developed and become so established over the years. It felt like the marshals couldn’t be bothered. In fact, two made me jump because they were hiding behind a wall – in the sun I might add and not the shade so it’s not as though they were hiding! There wasn’t great marshal support with many on their phones, talking or eating rather than directing us. There were two fantastic marshals however who I specially thanked and told them they were the best on route!

Chip timing said 2.33.31 – my watch said different (it wasn’t stopped). I knew it was going to be slow and it was. Then again, it’s another training run off my marathon plan. 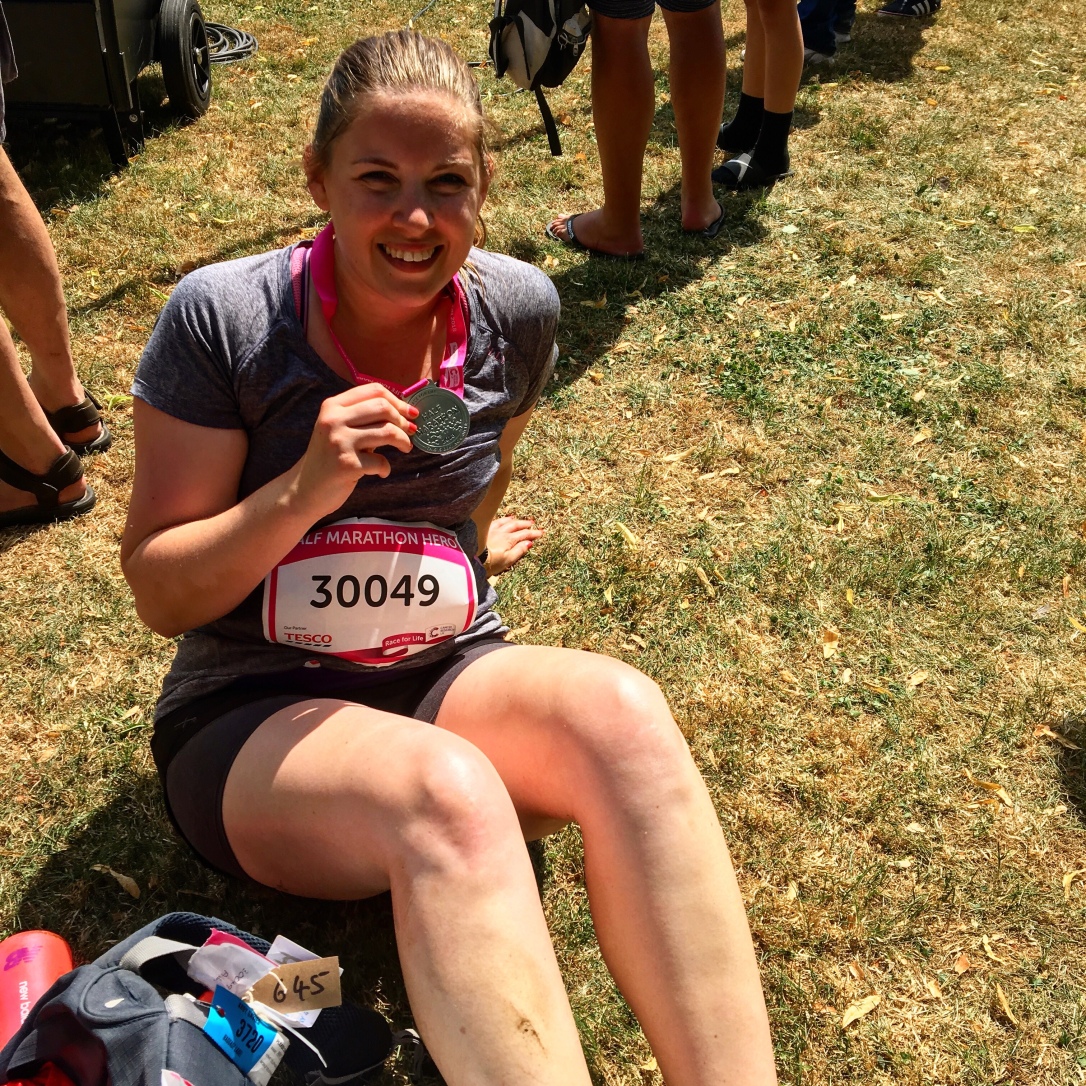 On a positive note, the goody bag and medal was really good!

To any of the 37 who have never ran a half marathon before, I’d urge you all to try another. There are much nicer routes on really well-organised courses. To those that trained their ass off to complete 13.1 miles but didn’t, you would have done it and you still can do it. Don’t give up.

I just think it’s such a shame that this particular half marathon didn’t work out, especially being chip-timed which generally means it attracts a club runner/someone who wants a time. Maybe in the future, it’s worth sticking to the 5k and 10k business model that seems to work so well all over the country and take on a North, Midlands and South half marathon that will attract a new audience. Once they have got these right, then maybe it would be time to roll them out. For now, I think for Leicester at least, the 5k and 10k events should be done and done well.

View all posts by Running Abby

7 thoughts on “Race Review: Race for Life Half Marathon, Leicester”